An article recently came out regarding college-graduate Lara Odoffin, who had a job offer revoked due to her braided hairstyle. Click here to read the story in its entirety. The company wrote in their rejection email, “ Unfortunately we cannot accept braids- it is simply part of the uniform and grooming requirements we get from our clients. If you are unable to take them out, I, unfortunately, won’t be able to offer you any work.” Now, despite intellectually understanding that we live in a racist and white supremacist society, I still couldn’t help feeling appalled by the overt disregard for cultural inclusion this company showed. I mean it’s 2015 right? 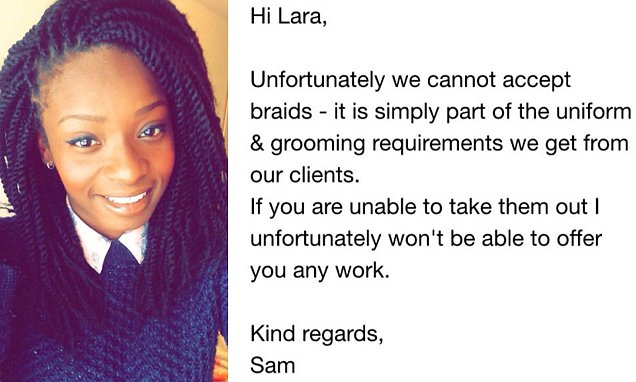 Picture of Lara and a quote from her rejection letter.

Then I was reminded of a conversation I had with a former white co-worker six years ago. She asked me about my weekend plans, and I told her that I was getting my hair braided. She then retorted, “That’s so unprofessional. Are you going to put beads on the end too?” Now keep in mind, this took place in progressive San Francisco at a non-profit educational justice organization so she should have known better, right? Even after such an insulting remark she was flabbergasted and “hurt” when I called her out on her racism. White people really hate the “R” word I guess.

[Related: 5 Black Women in Film Who Are Rocking It]

Furthermore, Odoffin’s story reminded me of a more recent incident that happened during my trip to Yosemite last weekend. I stayed in a small town named Groveville, about 3 hours away from Oakland. The locals pretty much went apeshit over my blonde braids and made it a point to ask invasive questions about how long it took to get my hair braided, as well as wanting a blow-by-blow of my hair washing rituals. One old white man even went so far as to tug on one of my braids while saying that it would “make a good horse rope.” Whatever that means.

However, it’s not that braids that come under scrutiny in mainstream society, black women with natural hairstyles of all kinds constantly have their hair regarded as some strange sideshow or novelty. A constant barrage of questions about hair texture, washing rituals, and requests to touch our hair  are microaggressions that we’re all too familiar with. However, there are a number of powerful and dynamic black women in the western world who are putting their foots down and saying “No” to Eurocentric standards of beauty and professionalism. Even major media outlets such as Forbes and Glamour are recognizing there is a close association between whiteness and professionalism that must be deconstructed if we are going to successfully combat ignorant stereotypes which are preventing black women from getting jobs we are qualified for and getting treating with the respect and integrity we deserve.  Here’s a list of 5 high-profile black women who are taking the professional world by storm while rocking natural hair: 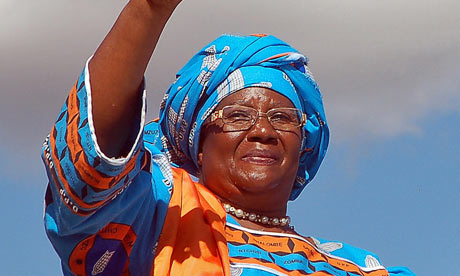 Image from The Guardian 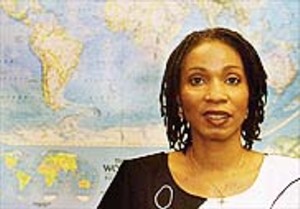 previous post
How I Learned to Be Okay with Identifying as Disabled When I’m Already in Other Marginalized Groups
next post
James Deen Breaks The Silence Amid Sexual Assault Allegations: ‘I Am Sorry’

How a Pandemic Helped Me Come Into My Gender Identity

A must-read via the @zinneducationproject: On Ja