Your Favorite Films: Then &…Wow, I Didn’t Realize That’s Sexist

Nine times out of ten, after a twenty minute scroll through Netflix, I end up picking a movie from the “Watch It Again” section. I’m a sucker for the re-watch, as clichéd as it is, it really is like visiting an old friend. That is, until, you realize that your friend, with whom you love and have great memories with…is kind of sexist.” I was a late blooming Feminist. Mainly, because I didn’t know it had a word. When I was 23, I proudly proclaimed it. It was enlightening, it was empowering, and It would turn me against some of my favorite films.

500 Days of Summer (2009), directed by Marc Webb, had charmed 22 year old me to point that I was dreaming of being devastatingly heartbroken. Yet, the film didn’t sit 100% right with me. It wasn’t until my recent re-watch that I found out why. In the first 30 minutes of the film, the quirky narrator describes Summer (Zooey Deschanel), the protagonist, Tom’s (Joseph Gordon Levitt), love interest as “average”. There is a stylized flashback of Summer, along with titles cueing us that this beautiful woman, at 5’5”, 121 pounds, was “average”, and that struck me right in my under 5’5”, over 121 pounds of insecurities. “Average” might as well have meant “normal” or “lovable”, and that meant I would never be those things. Throughout the film, Summer is painted as flighty (she moves from her hometown out of boredom), privileged (because she’s attractive), bleak (she doesn’t believe in love), and a hypocrite (she marries someone else in the end). All while our hero, Tom, is getting his heart put through the wringer, reminding all of us “above average” will never be loved the way Tom loves Summer. 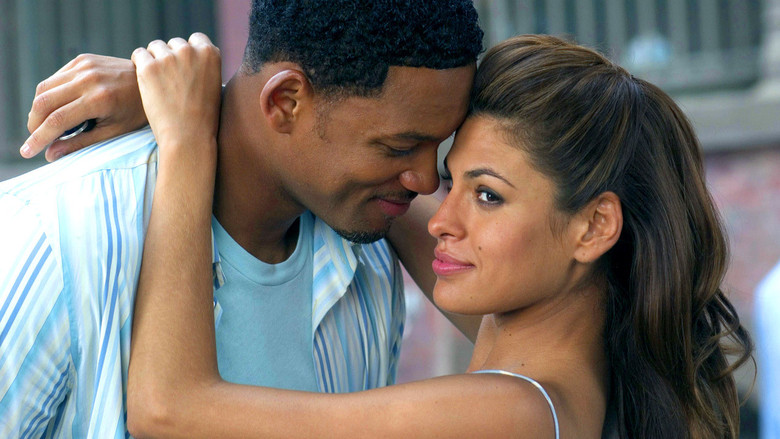 2005 was the year of the layered Polos, and Ed Hardy. Before VH1 blessed us with the first season of The Pick Up Artist, there was Andy Tennant’s film, Hitch. I absolutely adore Will Smith. He is my favorite part of Independence Day, Scientology, and the reason, despite it’s glaring sexism, I still love the movie Hitch. Will Smith plays Alex “Hitch” Hitchens, a “Date Doctor” who helps men get the girl of their dreams, and becomes a hot mess, himself, when he falls for Sara Melas (Eva Mendez). The film opens on some on-the-nose exposition of Hitch outlining his Basic Principles of “what women want” and immediately discredits classic blow-off phrases like “this is a really bad time for me”, “I just needs some space”, and “I’m really into my career right now”; because, of course, women don’t know what they want. Then he goes on to say what she really means is “Get away from me now” or “try harder, stupid”. I’m pretty sure those phrases aren’t completely interchangeable.

Mendez’s Sara serves as a refreshing counterpoint to all the other women in the film. She’s an independent, sharp tongued, workaholic who wears Beatles Tees. However, she’s also pessimistic and bitter. The women in the film can’t be strong and not cold, they can’t be smart and not frail, optimistic and not naive. Though Hitch makes a major statement by casting two actors of color to play the leads in a rom-com, it still lacks in the gender equality department.

Now, if either of these films are films you particularly love, you may feel somewhat attacked, offended, or ready to stop reading. That’s perfectly okay. This article wasn’t intended to make anyone guilty about their pleasures, its merely to bring to light some sexism in our favorite movies that we may have never seen before. To further prove this, and to win back your readership, the last film I’m going to be discussing, I hold very dear: Bret Ratner’s 1998 film, Rush Hour.

This buddy cop, odd-couple, action comedy stars two comedy legends, Chris Tucker and Jackie Chan, and has a place deep in my heart, despite its unintentional sexism. There are two main women in this film: young hostage Soo Yung (Julia Hsu), and the late Elizabeth Pena. Sadly, even as a tough, no nonsense LAPD officer and explosives expert, Pena’s Officer Johnson had just a handful of lines. Johnson helps execute the heroic rescue of the Consulate’s Daughter, Soo Yung, by disarming the bomb strapped to her body. However, her big moment was an ever so tense “…green wire, blue wire…” conundrum, which she solves by…guessing: “roses are red, violets are blue, sugar is sweet…” her wire cutters poised at each color, “and so are you.” Snip. No explosion. That’s a wrap on token lady cop.

The next installment of the franchise, Rush Hour 2, is leaps and bounds more feminist friendly, and features a leading cast of color. Not only is the main, ass-kicking “bad guy”, a woman (Ziyi Zhang), the supporting actress and love interest is as a “straight man” played smart, capable, and fierce by Roselyn Sanchez.

There is a bright side, to this flashback. During a recent re-visit, I found one particular mainstream Hollywood film that is way ahead of its time. The 1988 John Landis film, Coming To America is steeped in Feminist values, featuring a male protagonist who actually values Feminism and wants a Feminist partner!

In the end, as we passively watch end credits, one thing can be certain: though women’s representation in mainstream films can be a dark and underexposed, there are definitely bright spots in the Hollywood marquee for your favorite nostalgia films, guilty pleasures, and “whatever it is you like…” There is nothing wrong with holding dear the not-so-Feminist friendly films of our past, we’ll just know now how we can improve the films of our future.

Screenwriter, journalist, copywriter...from Vallejo Ca, currently residing in beautiful West Oakland. I graduated from the Academy of Art Univ. with a degree in Motion Pictures and Television that took me 6 years to obtain. On the night of my 25th birthday, I made sure everyone in the McDonald's drive thru knew this. I love to kamayan while watching an epic training montage, and overdressing for $5 movie nights. I make sure every script I write passes the Bechdel Test.

For Queer Nigerian Youths, #ENDSARS Is A Fight Against Police Brutality And Homophobia

ICYMI: Jackson, Mississippi has been enduring a wa

From CNN: “A recently-opened center for the LGBT

Capitalism makes coping with mental illness and he