12 Ideas for Halloween Costumes on a Tight Budget

Halloween can be daunting when you don’t have money to spend on a Halloween costume and you really want to do something incredible. Fear not — some of the best costumes out there are homemade and can be inexpensive if you choose wisely. In fact, you may already have a ton of this stuff in your closet!

One thing to keep in mind when creating a Halloween costume is not to appropriate from other cultures. It doesn’t matter if you grew up dressing up as a “gypsy,” “Indian” or “geisha.” If it is not part of your culture, it simply is not yours to wear. If you’re not a BIPOC woman, stop going as Frida Kahlo. On top of being appropriative, she had absolute disdain for gringas imitating her, as seen in a letter she wrote to a friend in Mexico:

“Some of the gringachas even imitate me and want to dress as ‘Mexicans,’ but the poor things look like turnips and the honest truth [is] they just look absolutely dreadful, which doesn’t mean I look good myself, but at least I get by.”

There has been so much good stuff to come out this year, you can even keep your costume topical. This Halloween, go as something other than an appropriative jerk or Kahlo-inspired turnip. It’s a much better look.

“What’s worse — jealous or crazy?” Beyonce’s iconic look can be achieved with a long blonde wig, flowing yellow dress, baseball bat and mischievous smile. Just don’t get too drunk and break something (or someone) with the bat!

(A note for non-BIPOC Beyonce fans: maybe this isn’t yours. If you insist on this look, do not even dare to think about heavy bronzer or changing your skin tone. Blackface is never a good look and it’s racist AF.)

Nothing says “Fuck Donald Trump” like an angry cat wearing a Hillary Clinton shirt (homemade or otherwise) and gloves with claws on them. The great thing about memes and political themes is that you can take bits from them and make it your own.

You can’t really get this “wrong” unless you were trying to put a conservative spin on it, or you’re a cis guy wearing a fake vagina with claws reaching out from it. Ladies and femmes, feel free to do that, though — I’m dying to see it.

3. Shaolin the Fantastic from The Get Down.

The babeliest (or at least the eldest) of the proto B-Boy crew, Shao the Fantastic is a great choice. You’ll need a LOT of red: pristine red Pumas, a red Kangol cap, black and red tight fighting camp-cut t-shirt, slim fitting boot cut jeans or red pants, a gold chain and a vinyl record to carry with you for good measure. Shao is a good guy coming from a tough life, and he knows how to hustle to get by. He’s a pleasure to watch on screen and seems like a lot of fun to cosplay.

This would be a great group costume effort, too. Dizzee’s amazing hippie meets funk turned B-Boy style is incredible and Jaden Smith is a treasure in this role, as are the rest of the incredible young actors in this crew.

4. Cadillac from The Get Down.

Cadillac is one well-dressed villain. Photo via Netflix.

Can’t feature the hero without the bad guy, too. Cadillac has the best disco style — think three-piece leather suits, but without the shirt. Big gold disco medallions and Superfly hats help polish off Cadillac’s insecure, hyper-masculine character. But don’t hate him entirely — he, like the tortured Shao, are merely products of their environment run by the manipulative Fat Annie. It’s worth noting that she feels like a very obvious nod to the original vision of Black Mariah from the Luke Cage comics.

Cadillac is the king of the disco dance floor, so if you choose to go as this incredibly entertaining villain, you better bring your best moves with you.

While I normally suggest staying away from other people’s cultures, religions and mythologies, Medusa gets a pass. The ancient Greeks were in no way an oppressed culture. While they gave us incredible philosophers, mathematicians and democracy, they also raped, enslaved, pillaged and stole from every culture around them with a weaker militia.

Medusa is a great feminist costume — as a gorgon, she takes the male gaze and literally uses it against men, turning them to stone. If I had the ability to turn to stone every person who spoke to my breasts instead of looking me in the eye or every cat-caller who had something to say about my big ass, there would be a lot of stone MFs out there.

It's 2016. If feminism isn't for women of all ethnicities and religions, than who tf is it for? Honor the Rosie the Riveters of the past, but remember that that's only a piece of the story. #rosietheriveter #intersectionalfeminism

Ah, yes. The lazy punk/rockabilly/feminist costume, because almost all of us have red lipstick, a bandana and either a blue top or denim dress. Let’s move away from the retro-coiffed Rosie of the past. How about these modern renditions of strong feminists of varying ethnicities? “We ALL Can Do It!” is their message.

7. Michonne from The Walking Dead. 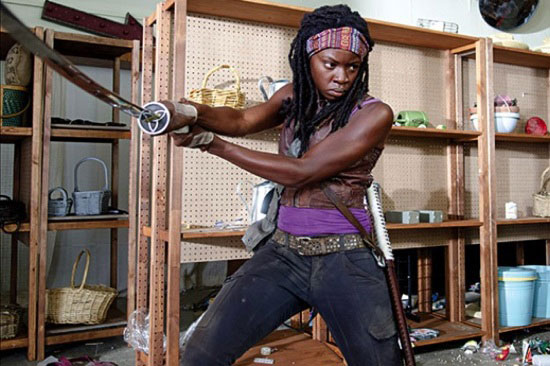 Michonne being the baddest of all TWD characters. Photo via Netflix.

YES! Michonne is the most badass character in The Walking Dead, IMHO. You’ll need a vest, colorful headband, tank, slim-fitting pants (preferably cargo because it’s the effing zombie apocalypse and the only truly appropriate time for cargo pants) and a big katana.

Remember when that a-hole European lady did blackface and dressed up at Michonne? DO. NOT. DO. IT. I look forward to a future where one does not have to say, “Hey, don’t do blackface.”

Regina George is the stuff of nightmares.

What could be scarier than the ultimate privileged bitch who has mind control over nearly everyone around her? Halloween may not fall on #PinkWednesday, but you’ll need a lot of pink for this costume. This bitch is terrifying…

Carlton, Will, and Jazzy Jeff.

The Fresh Prince and Carlton are the best BFF or ’90s-throwback couple costume. If you’ve got a third friend going with you, add on DJ Jazzy Jeff, Will’s best friend. Get your best bright-colored ’90s gear out for Will and Jeff and prep it up for Carlton.

There is a catch, though. In order to EARN the right to go as Carlton, you better be able to do The Carlton dance on command at any point during the evening. Otherwise, we’re just dressed up as Alfonso Riberio.

10. Eleven and the Crew from Stranger Things.

Will somebody please listen to one of the damn women in Stranger Things?

If you want another great costume, Eleven is phenomenal. Grab a frilly pastel pink dress and a blonde wig (or better yet, a shaved head!) and your trusty box of waffles. For added effect, put some fake blood on your nostril to imitate the nosebleeds she gets while being the absolute boss of the entire series.

If you have a crew of friends, they can go as the trio of boys or other characters from Stranger Things. Wanna delve a little deeper but still dig the ’80s vibe? Check out Goonies, ET, Close Encounters and Stand By Me for inspiration — the creators of Stranger Things sure did!

11. Clarissa Explains It All.

"Clarissa Explains It All" Could Be The Latest '90s Show To Get A Reboot http://t.co/m9WdFT7vHb pic.twitter.com/GJDYjLAnEE

Clarissa Darling was one of Nickelodeon’s first fashionistas. She was a precocious pre-teen whose best friend, Sam, was a boy that climbed up to her window via ladder and her nemesis was her Republican brother, Ferguson. Clarissa just wanted to live her life and have ALL of the clothes, but Ferguson and her pretentious intellectual parents were always getting in her way. She “explained it all” by talking us through zits, boys, training bras and brotherly hassles.

Clarissa, played by a pre-Sabrina The Teenage Witch Melissa Joan Hart, made some brave fashion choices. Some were great, some were atrocious, but all were worth seeing. She taught us to powerclash patterns and colors, pair denim jackets with floral and otherwise girly dresses, and to layer! Show Clarissa and the creators some love by your costumed homage to Our Lady of Constant Explanations.

The Cosby Show may be forever tainted, but we still have A Different World. Following Denise Huxtable to a historic black college, the series extends far beyond Lisa Bonet’s Denise and is full of amazing characters like Whitley Gilbert and Dwayne Wayne, as well as a springboard for young Black actors.

previous post
Astrology for Feminists: Week of Oct. 23-30
next post
The History of Dia de los Muertos and Why You Shouldn’t Appropriate it

“What, then, would it mean to imagine a system i

As an abolitionist Harriet Tubman fought against t

Teens and kids living through the pandemic without

Monday Chaos: A Mood Board